During my Bachelor Thesis in the Multi-Scale Robotics Lab at ETH Zurich, I developed a mechatronic device that consisted of a laser and a three-dimensional stepper that would allow me to locally change the magnetization direction of specific magnetic materials. In order to do so, I would have to heat magnetic material with a strong laser to a point that would make it thermally unstable. I would leverage this instability to change its magnetization direction to my demand by activating a strong external magnetic field in a certain direction. In a final step, I would image the magnetization of the material using the magneto-optical Kerr effect. 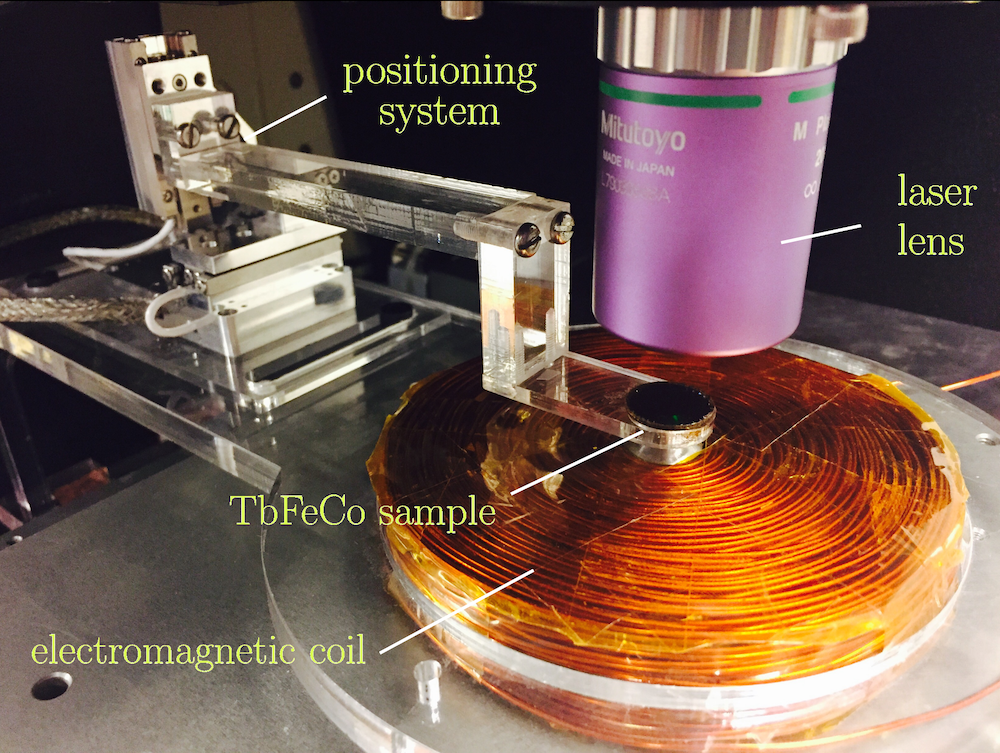 First forms of commercial magnetization reversal occurred during the 1970s, when magneto-optical disks seized the market of data storage. By a means of a writing process, bits (0 and 1) could be encoded onto the disk and later read out again by a special magneto-optical scanner. The demise of this technology mainly caused by the rise of the Compact Disk (CD) has opened doors to various other opportunities for magnetization reversal applications including magnetic patterning for microsystems, nanorobotics, and magnetic encryption purposes. In the past, materials that have been magnetically patterned usually exhibited single magnitude magnetization showing in opposite directions.

However in this thesis, I toppled this approach and demonstrate a mechatronic system setup that allows to pattern in an analog manner by discretizing the magnetization with interstates between 0 and 1. Only a certain range of materials are suitable for this application, such as terbium iron cobalt (TbFeCo). So far it has shown stable and highly tunable magnetic properties and strong magneto-optical effects, which serve the visualization of the magnetization. In the following figure, two different magnetization configurations are shown. The classical configuration we know from physics class is the one on the left, however the one I was dealing with is pictured on the right.

I developed a calibrated continuous patterning process and eventually verify the results by exploiting its magneto-optical properties.

The following animation shows the thermomagnetic patterning process (Magnetization on Demand = MOD) consisting of a 3D stepper, a uniform wavelength laser, an iron-core magnetic coil, and the perpendicular anisotropic material to be written. After the laser was switched on, it would emit its energy onto a pixel of the material. The material (here TbFeCo) would transform this energy into heat, locally increasing the temperature at that point. The temperature would be increased until Curie temperature (the material-dependent temperature that would erode all magnetic properties), until the external coil could be turned on in the desired direction with the desired strength. The external magnetic field H would then influence the direction of the local magnetization M.

These images show three examples of images I uploaded into the user interface I developed on the left and the MOD result on the right. Remember that you cannot see these results with your bare eyes! Light shades of gray refer to an upward magnetization while dark shades of gray suggest a downward magnetization. With some testing and optimization, I was able to take any image, upload it into my GUI, and generate the magnetic version of the image in grayscale.

Currently, the ETH spin-oﬀ Magnes AG is working on a magnetic encryption technology, similar to Square®’s technology. Therefore, the further development of this prototype system could advance its know-how and implementation for commercial application. Furthermore, as we have applied this system only for even thin ﬁlms mainly due to the laser’s constant focus plane, subsequent projects could focus on a changeable z-axis. For example, a microrobotic cylinder such as the RodBot coated in TbFeCo, could be granted a unique magnetization to make it more sophisticated. Alternatively, a ﬂexible TbFeCo ﬁlm could be ﬁrst magnetized and in a next step formed to a desired shape.

On a further note, the coil’s stamina could be elongated by installing a cooling system that prevents the electromagnetic coil from heating up with an integrated thermoelectric sensor aborting the writing process as soon as a certain temperature is reached. Following proposals could be considered:

A cooling system would not only prolong the writing capability, but also reduce heat-induced inaccuracies in the system in the future.